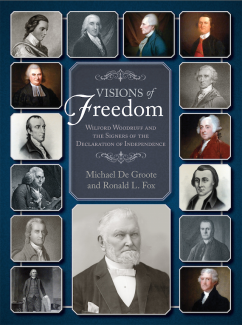 Visions of Freedom: Wilford Woodruff and the Signers of the Declaration of Independence is a book I wrote about the dreams of Mormon Apostle Wilford Woodruff in Utah in 1877 of the Signers of the Declaration of Independence and how the dreams/visions affected the Temple Theology of The Church of Jesus Christ of Latter-day Saints. The bulk of the book, however, is the biographies I wrote of each of the 56 Signers. Those biographies are also going to be made available, without the historical parts about Woodruff’s visions, in an e-book and print-on-demand edition called: Signers of Liberty.

Visions of Freedom began distribution to LDS bookstores and other outlets April 1, 2015 (great day, eh?). It has appeared twice as a featured book in Costco.

The book is also available on Amazon.com and DeseretBook.com.

An audiobook version of Visions of Freedom was also available.

Signers of Liberty, the e-book and print-on-demand version of the book that is just about the Signers and their lives (no Mormon stuff, not that there is anything wrong with that), is available as well.

My co-conspirator, Ron Fox, enjoyed meeting many readers and signing their books. We also may be available to speak if you want for various events. Ron has great photos and artifacts that he might be able to show. I can talk about Wilford Woodruff’s experiences and/or about some of the fascinating and inspirational experiences of the Signers. Email WoodruffSigners@gmail.com for more information/availability.

Errata is a fancy way of saying ‘mistakes.’ There are, indeed, some mistakes in the book. Yes, this is inevitable. But, as they come to light, I will list them here. If you notice any errors, please bring them to my attention by emailing WoodruffSigners@gmail.com or commenting on this page.